How I monetized a blog in 30 days: what worked, and what didn't 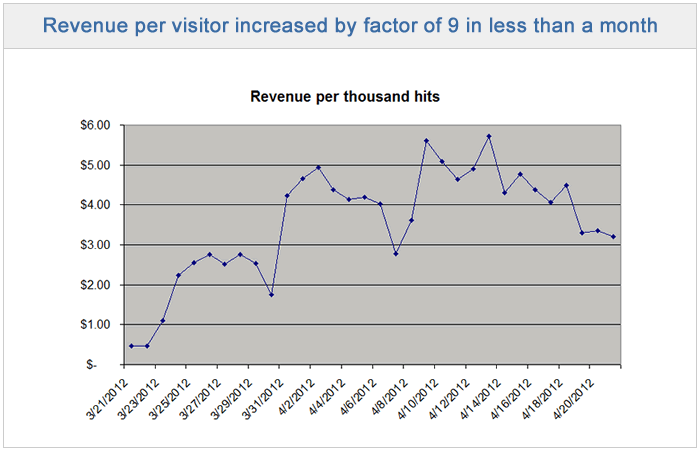 I help my mom run a cooking blog called The Yummy Life. She writes all the content, and I make sure the site actually works. We've been at it for almost two years, and until recently there wasn't much reason to worry about monetizing it because there was never enough traffic for it to matter. Then one day the Pinterest gods decided that we deserved better and in a frantic storm of pinning, our traffic shot up to about 25,000 visitors per day.

It's been about a month since the spike started, and in that time I've been working hard to figure out how to monetize the blog. I'm sure there's still plenty of room for improvement, but revenue per visitor is up 9x which seems like a pretty good start. In this blog post I'm going to go over my findings. I'll tell you what worked, what didn't work, and I'll even give some real numbers which seem to be almost impossible to find anywhere else online.

Disclaimers:
Before getting into the details, there are a few things I should get out of the way. First, results may vary. What works for a cooking blog would almost certainly not work for a startup blog. Also, I only have a month of data, so keep in mind that the trends I'm seeing could naturally get better or worst over time. Finally, the Amazon affiliate reporting is pretty terrible, so I had to make some assumptions to fill in the blanks (like that every item ordered generates the exact same revenue).

Also, I had a few basic requirements. My mom and I agreed that we wouldn't consider any monetization options that clearly hurt the user experience, or that interfered with the main blog content in any way (so no pop-ups, annoying ad link insertion, etc.). Also, this isn't my full time job, so I could only consider things that can be automated, and that my mom can handle when she's writing posts. Manually selling ads isn't an option.

What ended up working

If you don't feel like reading the rest of this post, let me save you some time. Here are the three major changes that all seemed to work incredibly well:

#1 - Remove as much crap as possible from the sidebar
Just like most blogs, our old sidebar was a mess. It's tempting to think of the sidebar as a place to dump content that doesn't fit anywhere else, but the more stuff you cram into the sidebar, the less likely your visitors are to notice the important content. Ultimately I realized that only two things matter on the sidebar: making it easy to follow the blog, and showing one obvious advertisement section. 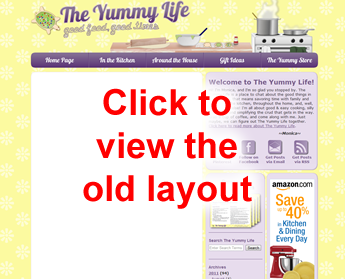 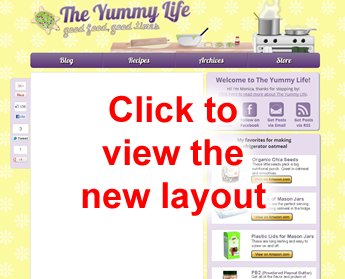 I could try to convince you of why this works, but instead let me just address any concerns you might have with real numbers. You'd think that getting rid of the Facebook widget would reduce the number of followers. Wrong. Because there's less clutter, we're actually getting more followers (they click through the "follow on Facebook" link at the top). You'd think that removing all the links to other areas on the site would mean a higher bounce rate or lower engagement. Wrong. The bounce rate stayed pretty much the same, and our average pages per visit increased when we made the change (we also improved the navigation which I'm sure helped, but the point is that the sidebar links weren't important). Long story short, every single metric I care about improved after simplifying the sidebar.

#2 - Use affiliate links to customize the ads for each post
I know it's easy to just paste some AdSense code into your site and let Google figure out what to show your visitors, but I found that it's better to target the ads yourself. Most blog posts have very specific topics, and if you can show visitors ads that are closely related to those topics, they'll be much more likely to click on them. To take advantage of this, I built a tool that lets my mom create her own ads for each post. Each ad links to a product on Amazon through an affiliate link.

For example take a look at the ads on the sidebar of this post. The post is about making oatmeal smoothies in mason jars, and the ad section has links to buy mason jars and oatmeal ingredients from Amazon. Of course people will want to click on those ads!

An example of one of our home-made personalized ads

We do still use AdSense as a fallback for any posts with topics that don't seem related to anything Amazon sells (like a post about how to use Pinterest), but we're finding that the Amazon affiliate links are generating almost twice as much revenue per visitor as the AdSense ads (~$5 RPM from Amazon, ~$2.50 RPM from AdSense).

#3 - Have the ads scroll with the page
One of the biggest problems with display ads is that they don't cooperate with your content at all. If a visitor clicks on one, they're taken to a completely different site and they have to stop reading your blog. That's why I think it's important to let them click ads after they're done reading the post, and in order to do that, you need to have the ads in the sidebar scroll down with the page so that they're never out of view. This ensures that they're front and center at all times, but it also gives the reader the option to ignore them until they're ready to look at the sidebar.

This one might be controversial because it could be seen as annoying, but I don't think that's an issue if you also follow #2. If the ads are actually relevant to the blog post, many of your visitors will be glad to see them when they're done reading. And for those of you who only care about the numbers, steps #1 and #3 combined to increase our AdSense CTR (click-through-rate) by a factor of 33 (.03% to 1%).

Now that I've gone over the three main things that worked, lets talk about all the things I tried that didn't work. Keep in mind that this is just my experience, so you shouldn't write these off as possibilities just because they didn't work for me.

Google AdSense text ads
I've found that the non-image ads from AdSense performed very poorly. I don't have great apples-to-apples comparison numbers, so you'll just have to trust me that the text ads didn't work (or don't, that'd probably be wiser). Also, anytime I see AdSense text ads I instantly think of all those SEO spam websites, which isn't really a comparison I want to draw.

Amazon pre-made banner ads
I mentioned above that my mom is making custom graphical ads using Amazon affiliate links, but before that we used their pre-made banners. Let me tell you, those things did not work. As you can see from the before and after screenshots above, the banner ad had top billing on the old sidebar. Almost no one clicked on it, and of the people that did click, almost no one bought anything. The numbers were close enough to zero that they're not even worth examining.

Amazon aStore
Amazon lets you make your own custom store to sell whatever Amazon products you want. That's what you'll see if you click on the "Store" tab on TheYummyLife.com. Let me be clear: NO ONE BUYS ANYTHING FROM THE aSTORE. Seriously. No one. This month we've had 3,288 orders placed through our on-page ads. We've had exactly zero placed through the aStore.

$0.99 eBook
I was really excited about this idea. On average we make $1 per order on Amazon, so what if instead of showing people Amazon ads, we offer them an awesome eBook for $1. We make the same amount of money, and we'd probably have way more willing customers (and no real ads). So my mom made a great 20-recipe eBook, I made a pretty cool landing page for it, and we put a nice big ad for it on the sidebar...and no one bought it. We sold under 40 copies despite giving it prime real estate on the sidebar and devoting an entire blog post to it. Also, almost all of the sales came from regular readers, so the numbers would have gotten even worse over time.

Publishing networks
There are plenty of content networks out there that will handle selling ad space for you. For cooking blogs the two big ones are BlogHer and FoodBuzz, but I'm sure there are similar networks for other types of blogs. We considered this option for a while, but they make you sign contracts which limit your control over your own site, and their terms seemed very sketchy. Plus, their payout would have been waaaaaay lower than what we're getting now. UPDATE: Since writing this post, we have switched to a premium ad network. There are plenty of downsides, but they do offer higher CPMs than Adsense.

Here are a few more random things I learned over the past month:

Pinterest is a force to be reckoned with. If you have a blog with lots of enticing/interesting pictures, Pinterest should be your #1 marketing priority. Push your readers to follow you, add a "pin it" button to your posts, and do whatever else you can to get a following there. It's unreal how quickly and easily things go viral there. At the time of this writing, the refrigerator oatmeal post I linked to above has been pinned over 206,000 times.

After the initial traffic spike, I expected things to slowly fall back down to normal, but that hasn't happened so far. Before the spike we were getting ~4k visitors per day. The peak of the spike brought ~67k. It then fell to about 20-25k and it's stayed there ever since. There hasn't been any downward trend in the past three weeks, and almost all of the traffic is still coming from Pinterest.

If you have any questions or ideas, hit me up on Twitter (@TylerMKing)