Launch day: The new design is officially out of beta!

In case you haven't heard, we've spent almost this entire year working on a major update to Less Annoying CRM. It's the largest project we've ever worked on and it includes a ton of great improvements. Here's a preview of how the new version looks: 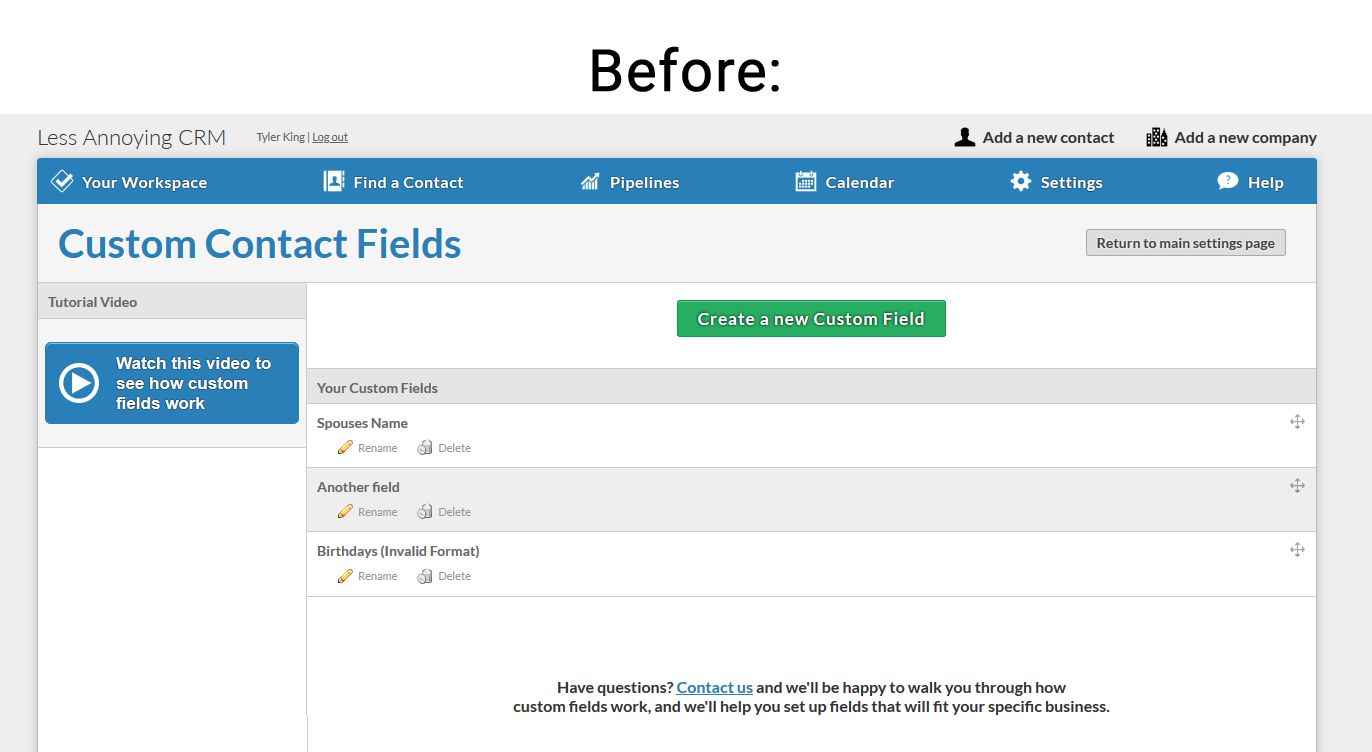 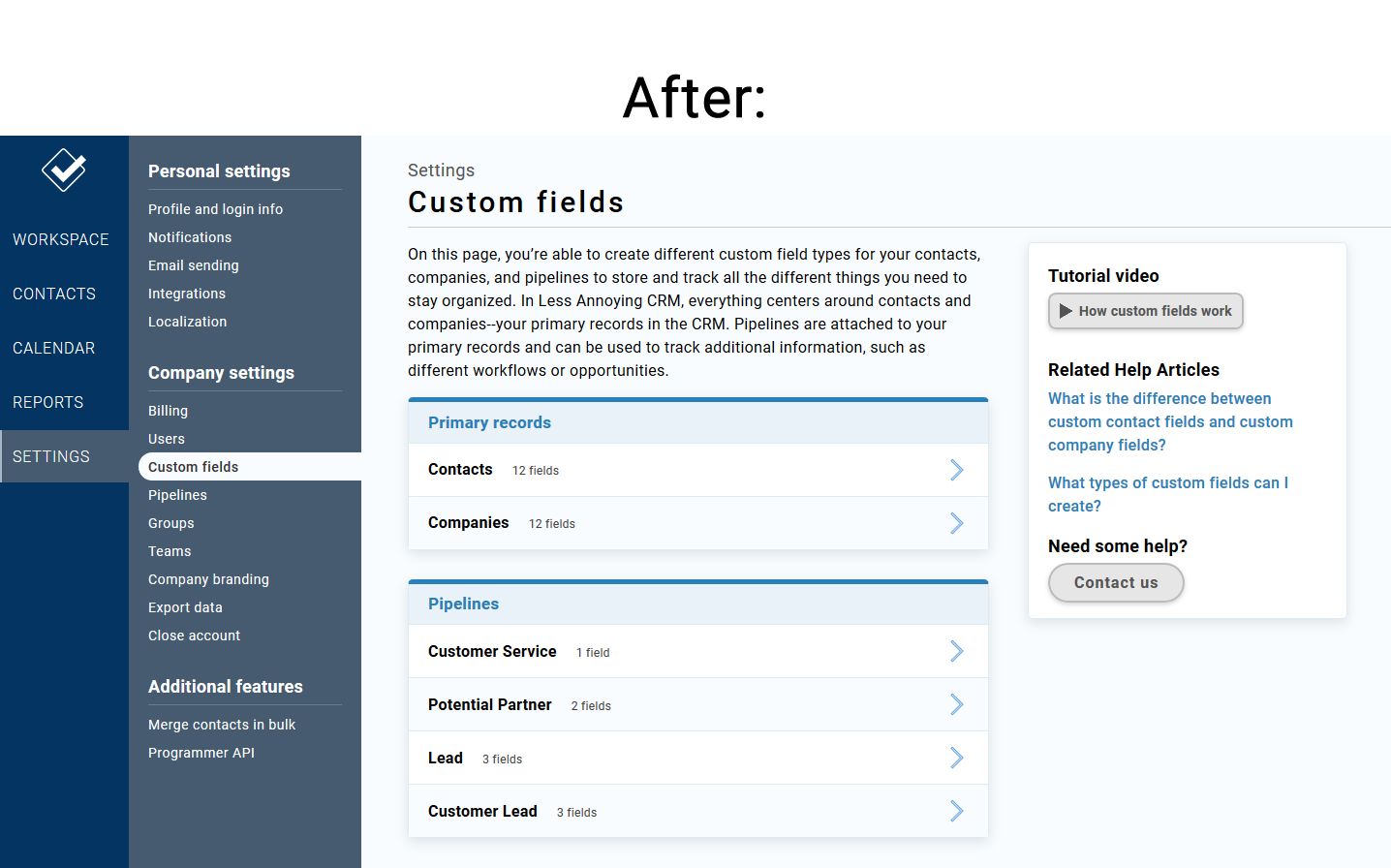 As excited as we are about the new design, our #1 priority is making sure that we don't disrupt our customers' existing workflows. Because of this, we decided to take it slow and collect a huge amount of customer feedback before we were ready to make this new version official.

We've been testing the new version internally for over six months. We started inviting beta testers about three months ago, and gradually more and more of our users have been switching over to the new design. We now have hundreds of people using the new version, and the feedback has been incredibly positive. People have been saying things like:

"I switched over to the new UI and I love it. Everything continues to make sense…And there is nothing I'm missing from the old UI. It just works, only better now. Thank you all so much!"

"I'm enjoying the new version more and more each day. It is FANTASTIC!!! The menu is so intuitive that it makes my workflow so much smoother. Thank you!!"

"New layout looks great! Love how it brings functionality to the App too!"

With all this validation we've decided that as of today, we're officially launching the new design!

What does this mean for our customers?

When software is in "beta", that means it's not really ready for mainstream use. There might be a lot of bugs and rough edges that a typical user wouldn't want to deal with. By taking our new version out of beta, we're saying that it's ready for prime time. The new design is officially launched. This means a few things:

There's still work to do on the new version, but it's stable enough to be the official version of LACRM

This launch doesn't mean that we're finished working on the new design. We have a long list of things we still intend to do before we'll consider this project completely finished. But by removing the "beta" label and officially launching the new design, we're saying that we think it's stable and better than the old design, even if certain things still aren't 100%.

We're also still collecting feedback from users on the new design, so if you have thoughts for us, please let us know!

All new signups will start with the new design

Users on the old version should start planning their upgrade

We recently started emailing all 22,000+ LACRM users to let them know that the switch to the new design is coming. I know that learning how to use a new interface can be a bit of a hassle, even in cases like this where we were careful not to fundamentally change anything. To help with this, we want to give everyone plenty of time to make the transition at their own pace.

If you're still on the old design, you can upgrade here. I'd suggest timing it with a period that isn't too busy for your business, so if you have a busy holiday season, it's probably a good idea to make the switch soon so that you can be comfortable with the new design before things get busy.

While we want to give you as much time as possible to make the switch, it is important that we get all users on the new design before too long, because we can't make other improvements to the product until everyone is switched over. For this reason, anyone who hasn't opted in to the new design will be upgraded automatically starting in January.

Help articles will start being updated to show the new design

Because the new design is now the "official" version of Less Annoying CRM, we're going to start updating all of our help documentation and videos to show the new design instead of the old one. This will be a gradual transition, so for a while things will be split between old and new, but eventually we'll get everything 100% on the new version.

This isn't just about design

In addition to the updated look and feel, the new version of the product will include some major functionality improvements. We already have a recent contacts feature, more export types, and some improvements to custom fields. We're also in the final stages of testing our most requested feature: Outlook Calendar integration, which will only work in the new design. Plus, we have more custom field improvements planned for right after all of our users have upgraded to the new design.

We couldn't be more excited to finally share these updates with all of our users! The LACRM team has been working hard on this for months, and if our beta testers are any indication, the result will be an easier, faster, more functional experience. Thank you so much for being a part of our growth as a product and as a company. As always, if you have any questions, thoughts, or ideas, don't hesitate to reach out!

P.S. In case you missed it above, here's the link for existing customer to upgrade to the new design.