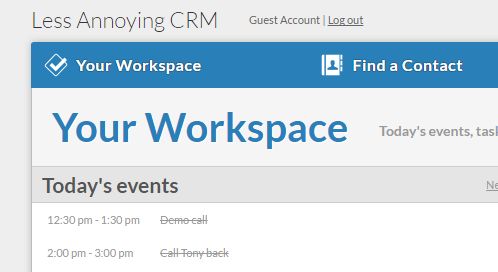 If you follow Less Annoying CRM, you've probably noticed that it's been quite a while since we've released an update. That isn't because we stopped working to improve our product, it's because we've been working on a huge project that has taken over a year to complete. Finally, we're ready to launch the newest version of LACRM: version 3.6. We will be rolling it out gradually over the next month or two. After your account is upgraded, you'll see a notice letting you know after you log in.

Before you get too excited, I should warn you that this new version doesn't include any major new features or changes in functionality. Don't worry, we have plenty of new features planned for the future, but this update is about something more fundamental: it's about improving the technology framework our app is built with.

Less Annoying CRM was started over seven years ago, and a lot has changed since then in the world of technology. Web apps can now be built to be faster, more powerful, and more responsive than what was possible back in 2009, and our app was starting to feel a bit outdated since it wasn't using the most modern tech. As much as we want to add new features, it's even more important to us that we focus on really perfecting the core experience, and we couldn't do that with our old technology framework. So with version 3.6, we switched over to an entirely new framework and polished up the design a bit to make the app look and feel a bit more modern.

Here are some answers to questions you might have...

Q: What is this "new technology framework"

When I say we switched to a new tech framework, what I mean is that we rebuilt a huge portion of our application from the ground up using a new technology called "React". React, combined with all of our new code, allows our app to respond instantly to your actions. Before, pretty much any time you took an action in the CRM, you'd have to wait for your web browser to communicate with our server (that's why you'd see that loading bar all the time). With React, there's a lot less of that. Pages load faster than ever, and once the page has loaded, the actions you take can normally be applied instantly without waiting.

We haven't moved every single page over to this new framework yet, so some of the app will still behave like it did before. But if you want to see an example of React's speed improvements (after your account has been upgraded to 3.6) go into the settings section and click around. Pages such as the custom pipelines settings or custom fields settings will load instantly, and you can make modifications (add a custom field, edit a pipeline, etc.) much faster. We'll be moving more of the core CRM functionality over to React gradually, so you'll eventually see similar speed improvements to the entire app.

Note: If you're a nerd like me and want to learn more about React, here's the official info page.

Q: What design changes did you make?

At Less Annoying CRM, we've always had a "function over form" approach. We want the CRM to be simple, intuitive, and fast, even if it means the app doesn't look as trendy as some of our competitors. Having said that, after over four years without a design update, the app was starting to look a bit stale. We know that thousands of small businesses rely on us every day and we certainly didn't want to complicate your lives by changing things around for no reason, so we just modernized the visual design a bit while leaving all of the navigation and functionality exactly where it was. Once your account has been updated, you'll notice that it's a bit easier on the eyes with a new font, updated colors, and fewer visual distractions (not as many shadows, color fades, etc.). Hopefully you like the new look!

Q: You spent over a year to speed up the settings section and make some design tweaks? Seriously?

You might be wondering why it was worth spending so much time on these specific improvements. Why weren't we working on new features? Well, the whole reason we decided to work on version 3.6 is because it puts us in a great position to put out new features in the future. When we were previously using outdated technology, every new feature we developed was slower and more complicated to build than the last. With our new framework, we'll be able to seriously speed up our other development projects. Basically, we decided to sacrifice in the short term (spending a year on back-end tech) so that we can be better in the long term (more, better improvements going forward).

Now that version 3.6 is finished, we have a number of exciting improvements planned. The three that I personally am most excited about are an updated calendar (this is long overdue and we've been talking about it for a long time, but version 3.6 was a necessary prerequisite), an improved import tool, and significantly more robust custom fields.

Additionally, over the last year we've hired two more full-time software developers (doubling the tech team from just the two co-founders to four people now) with another scheduled to join us this summer. We also started a summer internship program for software engineering students last summer which has been a huge success, and which we're expanding this coming summer. We are in a much stronger position than we've ever been to move our product forward.

I really hope you enjoy the new version of LACRM! The official roll-out is beginning now, and we expect it to take a month or two to move all of our users over to the new version. If you don't want to wait, you can contact us and ask to be put at the front of the line. As always, we'd love to hear from you if you have any feedback or run into any problems with the new app.